What’s that tent doing over there? 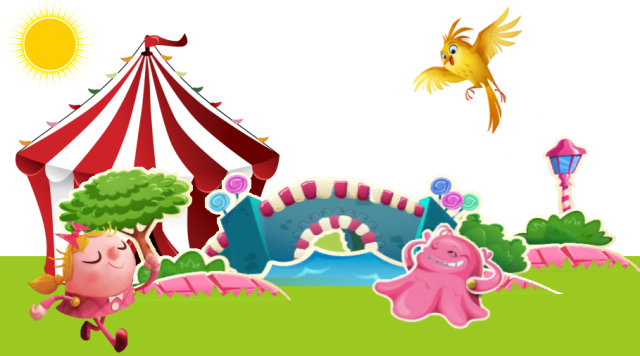 As she heads towards the bridge she sees Chewy just taking it easy. Then she looks to her left and sees a tent.

“What’s that?” Tiffi thinks to herself. “Chewy wake up! What’s that tent doing over there. Who put it there and when?”

Chewy wakes up and looks in the direction that Tiffi is pointing and sure enough there is a tent there!

“Tiffi, I never saw that before,” says Chewy. “I have no clue who put it there or why. It must have been assembled while I was napping. I’ll check it out later and let you know.”

Then he rolls over and goes back to sleep.

Another text message is coming in. Wow Tiffi is going to be hopping today. She hopes that she brought enough fishies for the players.   She takes care of all the three players but then she gets two more text messages so she moves on to the next.

Her phone rings and it’s Kimmy calling her.

“Hey sis, what’s up?” Kimmy asks. “Are you rested up from our beach adventure? It didn’t take me that long to get home yesterday. So, what are your plans for today?”

Tiffi tells her about the tent.

“You’re not going to believe this Kimmy,” says Tiffi. “I was on the way to help the first player and when I got to the bridge I saw a striped tent assembled behind the bridge. Chewy was chilling out, snoring away so I woke him up. I asked him what it was all about but he never saw it before so he assumes it was put up while he was napping. I wonder what’s going on. When I find out I’ll let you know ok?”

With that they say goodbye and Tiffi continues on to help more players.

She finishes with the last player and no new text messages. The afternoon is coming to an end so it’s time for her to head home.

As she reaches the bridge she still sees the tent. Chewy is nowhere to be found so she can’t question him. She decides to walk over to the back of the bridge. Just the tent and nothing else. It’s going to be a wait and see what happens.

Start at the beginning – The circus is coming to town!