A sudden rise in the leaderboards have startled not only our team, but also our rival team who should be at 1st place.

For proof, look at this:

This is a recent screenshot taken 1 day before this incident happen by one of the members of T.N.T. Dragons in the Official Discord.

Here's one taken 2 days before by one of the members of Magnets:

This incident startled both the COTR Community team & T.N.T. Dragons because we were having a tight match, but COTR team declared Dragons winner of this season, but then suddenly, our friendly competition have been trampled with because of this.

In Trophy Magnet's statement, they said that they were also shocked and said that one of the recent members cheated, and then quit/got kicked out the team. 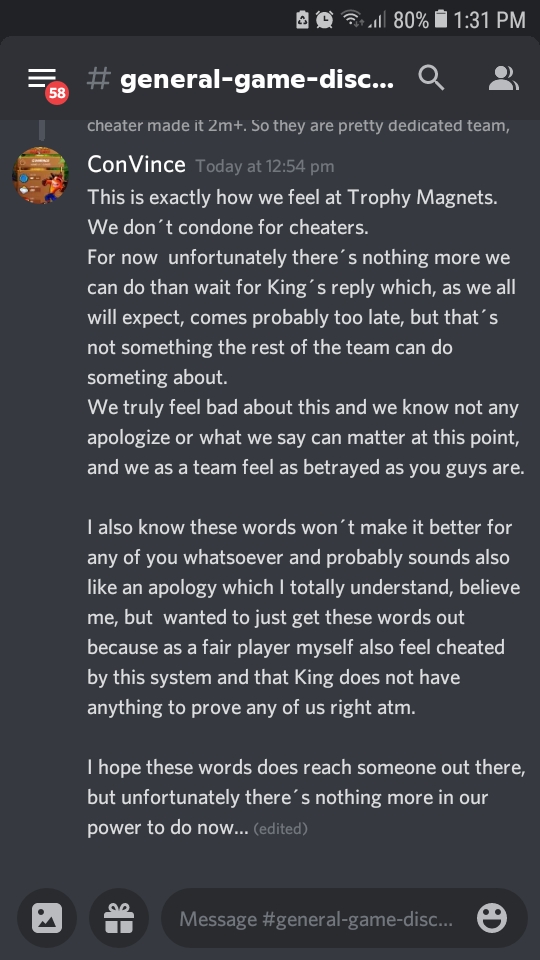 So it seems that the cheater is already out of the Magnet's team, as it's member count is 29/30.

Everyone in the team is very disappointed with this, but the one who took the greatest impact is T.N.T Dragons, because they did great effort on competing with COTR Community Team.

Not only it took all the fun and competition (despite the game already having tons of issues), but also break the heart of one of our members... and decided to quit the whole game... 💔😔

The game needs a better Anti-cheat system, not like before where it attacked both the innocent competitive players and the cheaters. One way to resolve this is the game to have a trophy limit, where every single player can only accumulate certain amounts of trophies daily. (Which I will be having a separate thread later.)

The COTR Community team and T.N.T Dragons are so disappointed in this matter, so our members ask for compensation,

perhaps sending us the rest of the crystals and materials in the places we were supposed to be, or just remove the excess 1M+ trophies out of the Trophy Magnet's team.

I don't know if this would get resolved before the season ends, but please, this had already damaged our perspectives towards the game, if this kind of events keeps happening, I don't seem to see any brighter future on the game's leaderboards.