Games / Discussions
Give us your feedback here!
Issues with Flash Player? Read this!

Island Rush event! It's back 🙌 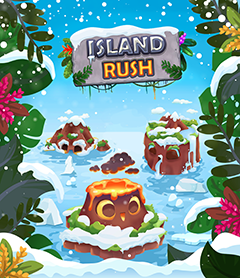 Get the chance to customize your own character, and contribute to the customization of a character in the Farm Heroes game 🚜

What is the event?

Island Rush is a live tournament where players collect new stars and compete for rewards, including the chance to customize a character to appear in Farm Heroes Saga!

The live tournament lasts for three rounds. Collect as many new stars as you can, to gain a place among the top ten players in your group. The top 10 win a reward and move on to the next round.

At the end of the third and final round, the top player in each group will win the chance to customize a character in the game!

To participate in the next round it's essential you return to the game at the end of the round to see if you're in the top 10, and claim your rewards. Also remember that to qualify for a next round, you must play online. If not, your progress can't be tracked and your score won't be validated!

For more information on how it works, please continue here.

Have a Farm-tastic time and good luck!

Please note: some players are seeing "Harvest Rush". Don't worry, this is a small error: the event is Island Rush!