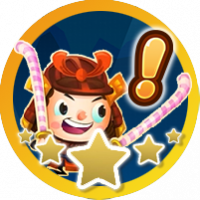 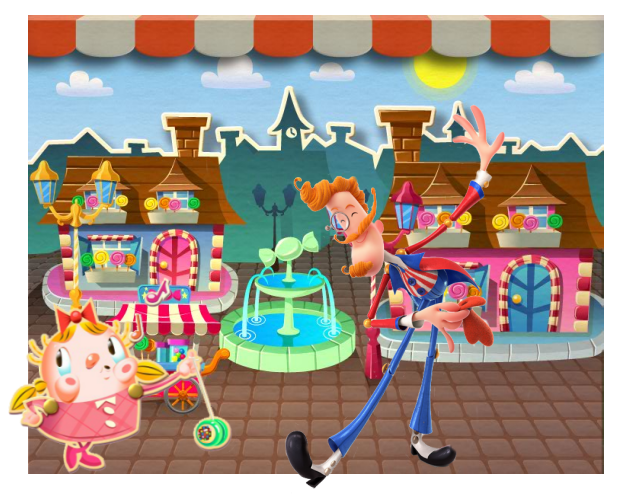 Sweet little Tiffi was found in a candy bag and  was brought up by Mr. Toffee.  Her adopted father, Mr. Toffee, who runs the Candy Store in Candy Town.

He sells the best sweets in the Candy Kingdom.  Despite his name, his favourite candy is jelly rather than toffee.  He is very thin, and very tall, more than twice Tiffi's height. He has curly hair that's dyed orange just like his eyebrows, his goatee, and his moustache.  His hands are gigantic that it can fit almost his whole head. He wears a red suit with a blue tie, blue pants,  and has a midget red hat on his head. There is a monocle on his eyes. He also wears black shoes with golden buttons. He is worldly and intelligent, yet modest and always happy to point people in the right direction (quite literally).  Everyone loves Mr. Toffee not only because he’s helpful but because he sells the best sweets in the whole of the Candy Kingdom. The magical day when he  found Tiffi was the best day of his life and since then he has dedicated much of his time teaching her about the Candy Kingdom.

Who is Yeti?  Learn all about him here.

If you arrived here, you might want to start at the beginning .....

You can find out more about our Superstars here
❤️ ❤️ ❤️ ❤️
"Mother of Superstars. Relentless and passionate like no one else."
A must read for all community members:  Welcome new-Bees!
Check out the NEW stories that I just wrote!
❤️ ❤️ ❤️ ❤️
Flag 10 · 3Helpful Sassy! 5Sweet Love 2Haha
Sign In or Register to comment.