Games / Candy Crush Soda Saga / Ideas
Are you a Soda Word-Search Expert?📖🔎 | Want to celebrate Valentine with us?💘 Participate and win Gold Bars! 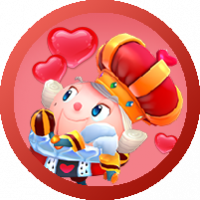 chibading Posts: 1 New Bee
June 2019 in Ideas
I've had the new feature of Mr. Toffee's Fair for a while now and am growing increasingly frustrated with it. For one, because often times the one square required to complete a line gets blocked by another player for days. Second, because most of the times I feel like I am the only player actually completing quests at all, while the other players just benefit. They might be bots, but I'm giving you the benefit of the doubt there.
My suggestion is to reward players with boosters, once they have completed say 12 squares. That way you could give an additional incentive to players to actually engage with the new feature of Mr. Toffee's Fair and reward those, who put in most of the work.
Cheers!
June 2019
Flag 10
10
Up
10 votes