Ashraf Posts: 3,658 Legend
July 2019 in The Fun Area!
The making of candy crush soda saga
I found this article on the internet
& wanted you to read it with me

Shaking it up: The making of Candy Crush Soda Saga
January 7th, 2015

We caught up with King’s chief creative officer, Sebastian Knutsson, to find out more about how the company went about developing a follow-up not just to a game, but to a phenomenon.

Pocket Gamer: Is Candy Crush Soda Saga a sister title or a sequel?

Sebastian Knutsson: Candy Crush Soda Saga is the sister title to Candy Crush Saga.
It’s a separate game that’s been designed to play alongside the original and brings lots of fun new features to players who love the gameplay and story of the original but are looking for new challenges and levels. 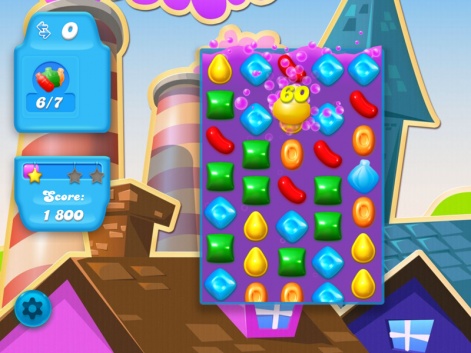 The two games can be enjoyed side by side

When it was decided to make another Candy Crush game, what was your starting inspiration in terms of keeping the series relevant?

We have millions of players that enjoy playing Candy Crush every day so when thinking about the sister title, we wanted to create a game that was similar enough to the original so that players would recognize it, but at the same time offered a fresh take on the game so it was different in its own right.
The team has done an amazing job in achieving this with Candy Crush Soda.

We’ve had to tread very carefully when creating the sister title to a game as hugely successful as Candy Crush Saga. We wanted to create a game that was fresh, but still unmistakably Candy - that’s not an easy challenge.
We took time during the development process to find the right gameplay, testing it with users, getting valuable feedback and adapting the game accordingly. We did this until we had a final, polished product we knew our players would have a lot of fun with.

What is the key ingredient that makes Candy Crush Soda Saga so addictive?

We would say the game is engaging, rather than addictive. This next installment in the Candy Crushfranchise offers players lots of new dimensions of gameplay which will keep them engaged and wanting to progress further through the Saga map.
The team has done a great job in creating exciting new and improved graphics, new candy combinations and a number of new game modes, in particular the new Soda mode where players switch bottles and candies to release purple Soda and save Candy Bears.
My personal favourite is the ‘Frosting’ game mode where you have to match candies to smash the ice and set the Candy Bears free.

What was the thinking behind the soda aspect?

At the beginning of the development process we experimented with different types of gravity in the game, so candies would float upwards and sideways instead of always falling down the game board.We wanted to bring something new and totally different to our players for the next installment in the franchise.
When we felt that the reversed gravity gameplay really worked it was natural to find something that people could visualize this with and, in a world of candies and sweets, what’s more natural than Soda?

How has King’s relationship with Facebook coloured the development ofCandy Crush Soda Saga?

Facebook remains an important partner for us and it adds a social layer to the gameplay experience which allows people to play in a variety of ways, whether it’s on PC or mobile. 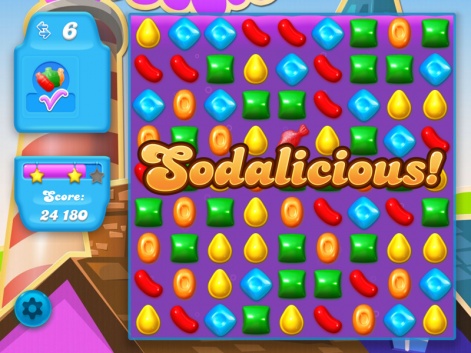 With Soda, and in fact all of our Saga games, our goal is to enable our users to play on any device or platform, anytime and in a synchronized way.
We also enabled a new feature for our Soda players on Facebook. If they look in their settings, players can now choose to play the game in full screen mode. I think this enhances the player experience due to Soda’s3D graphics.

Candy Crush Soda Saga launched one of the most successful video advertising campaigns in Facebook’s history. What was the thinking behind the game’s advertising strategy?

We wanted to celebrate the launch of Candy Crush Soda across multiple channels, so we created a fun, creative and high impact marketing campaign that would entertain our players and generate the excitement and fun that we aim to achieve with our games – the Facebook campaign was one element of our overall campaign.
We celebrated the launch of the game with some really fun events, triggering a magical Soda fountain display at Tower Bridge in London and transforming a stretch of Broadway in New York with giant versions of the new candies, Candy Bears and Soda. These events were followed by the global launch of King’s first ever live action TV ad for Candy Crush Soda as well as a high impact outdoor campaigns in major city locations and transport hubs.