A Farm Heroes guide to blockers and obstacles of satisfaction 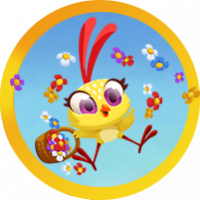 Flowers are the first seed. Make 3 rows next to them and they are gone. Later on by level 586 we have to grow our own from seeds by swapping it with a healthy water drop. Swapping a healthy water drop with a flower seed will make it germinate. The same with grass seed on level 41, and hay on level 461! Grass made over areas of miserable slime cancels the grumps out.

On Level 27 eggs appear. To crack eggs you need to make a row of 3, they join together and become one cracked egg. Make a row of 3 cracked eggs and they join together to become a chick! Later on you will also meet alligator eggs. To make an alligator egg, you do the same. Only they start off sitting on nests first, then you need to remove the nest, then crack the egg then match them up. Chickens will appear, they also lay eggs. It's rare that eggs will fall down with crops if chickens are around so you will have to do all the work here. They arrive on level 191 proving for once and all that the egg came before the chicken haha. To move the chickens you make a row next to them causing them to flap their wings, lay an egg and fly across the board. Often landing on crops we were planning on making a row with. Sometimes they lay cracked eggs which can help or hinder depending on where they lay them. You can also move them with a shovel. Cascading crops can move them more than once in a turn also.

Bombs appear on level 236. You need to make a row that includes the same crop to remove them. If you have played Candy crush saga, you will have seen them before. Get them before they count down or they explode and steal your gathered crops!

On level 266 Mr Spider appears. This cute friendly looking insect throws himself into any empty nest and spins a web around himself. You need to make a row including one of the webbed crops to break it. Once there is a clear row touching the spider, the next move evicts him. Once there are no empty nests he goes away.

Read how to remove the spiders here

The snowballs appear on level 311. Unless they are moved away from those snow squares they will just re-snow! Underneath them are your poor crops. As they are moved down the board and away from those patches, making a row of any crop directly next to them will cause the snow to break away, freeing your crops. Be careful you don’t get many on your board or its like an avalanche! Your board will be full of snowballs and no crops. If you have a board with grass seeds on, making grass over the snow squares will melt it away stopping them reforming where there is now grass.

Match next to the firecrackers 3 times and they explode, with several sparks landing anywhere on the board. Landing on webs or ice or eggs is handy as they break them. Landing on crops means they remove them. It's like having several shovels at once! On some levels though they will be part of requirements and you might have to get a lot. They can be handy though. These little beings spark into level 356

Frogs are red, blue or green. Blue slurps up water, Red eats strawberries and green finds apples the best. They are not handy if you need to collect any of those and you have the matching frog because they eat your crops! However if the crops they eat are not needed, they can remove them, leaving room for better crops to fall. Meet those on level 431. Move or activate them by making a match next to them. Luckily they will only move once in a move so won’t be affected by falling crops. Be warned though, they usually leap just on the crop you were about to match! They have big bottoms and that’s all I am saying about them.

Beware of the sheep and Rob the Rabbit!

Meet the black sheep of the family on level 806, with his good counterpart starting life on level 431. These sheep need to have a row made next to them and they will move to where the last crop was moved in that row. The levels where you need to collect them will need you to lead them across to the hay, or in some cases, make hay to lead them to. Now you see why we spoke about the hay seed earlier!

I would advise that you always make the row across, or in between as many sheep as you can if leading them onto the hay, because if you can move 3 sheep onto the hay in one move, it saves precious moves for the crops gathering. You can lead as many white sheep as you want onto the hay as long as the row touches them all. The last crop you move will be where the sheep moves to.

You will meet Rob the rabbit on many levels throughout the game. His one purpose is to eat all the carrots. Making a match next to him will stun him for 3 moves giving you time to pick carrots for yourself. If you are feeling particularly mean, you can hit him on the head with a shovel and that stuns him too!

3 Stages of a firefly that first appear on level 491. Closed, open, lit. They have been altered so once open they stay open now! much better. Oysters are found on level 626 first. They only need 2 matches made next to them before they move. But unlike the fireflies, if you open them and then do not make a match next to them to remove them, they will close up again. Awkward when they are in a tight spot.

River logs, The Bull and Mushrooms

Crops sit on logs starting on level 851, sometimes flowers do too, or webbed crops if there is a spider near. They move along the river, one square with each move. Sometimes this can be useful because as they move crops around it gives you the option to make some other matches you wouldn’t normally be able to make. They can also be handy in some cases if you want to get a bull out of the way, you can send him onto a log to float around.

The bulls and mushroom are a little more complicated so to make it easier for you we have separate guides for you to look at:

How to control the bull

Grow your own mushrooms

Weed Blockers cover spaces on the board and need to be removed by matching next to them.

Each time you match next to a Weed Blocker, it will remove one layer by removing a yellow petal from the grass. Match 5 times next to it to completely remove the weeds.

☕ Keep safe...Keep social distancing. I don't like people anyway  😉☕
🐥Life's not about counting chickens. Unless they all escape their coop of course! 🐤
New contest! 🍏 Win a badge and a chance to win gold! 🍏