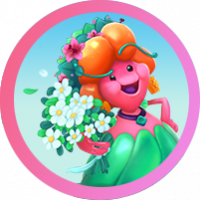 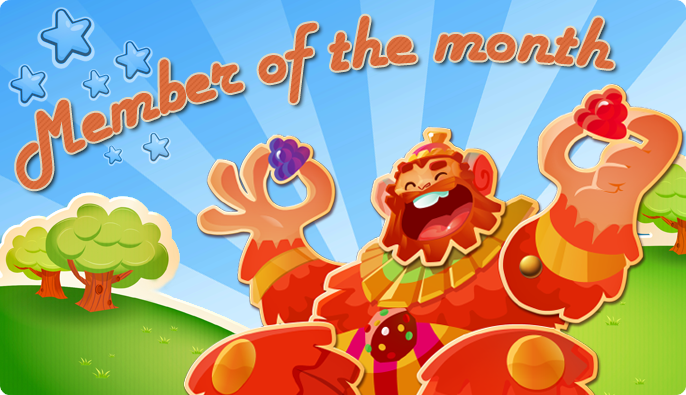 For the month of June, our Community Managers and Game Mods have decided the Member of the Month is...

Our @LoveDachs is a beloved member of our Community, always up for good fun and with a deep understanding of what the Community is about: friendship and support!

You deserve the Member of the Month badge, a permanent entry in the Community Hall of Fame and awarded you with 200 Gold Bars to your favorite game.

🎤 And now it's time for us to listen to our brand new Member of the Month? Let's pass the mic to her!

💫Which of King's games are you currently playing and what do you like about them? Which one is your fav?

I am playing CCFS, PRS and FHS. I'd have to say Friends is my favorite, it was the first King game I tried a little over 2 years ago. Only just recently started Pet Rescue in early February and Farm Heroes in early May.

Besides *Friends* being my first love I'd have to say that I like the characters, the costume changes and how you get to collect them and the way the game is played. I like the strategy of how you play the game, creating candies like wrapped and striped to traveling fish and I especially love making color bombs. I will study a board and look to see if I can make certain plays where I will end up with a color bomb. Some of the strategy comes in when you decide the best way to use these boosters after you have made them. There are daily rewards and three daily quests to do...they range from easy to hard, I seem to get the 22 color bombs an awful lot at times. I guess my only complaint is that there isn't any way to easily get to lower levels besides scrolling and jumping through the portal.

*PRS* I like the fact that you are rescuing animals and when you're not doing that you're clearing all of the blocks. It can be challenging at times with some of the blockers and obstacles but it wouldn't be fun if it was too easy. They have some cool boosters too. There is a daily reward and the daily game is very quick to play and you're done. Also you collect paw coins that you earn along the way to cash in for their boosters, which I have done a few times so far. I also like the episode race, have won most of them because people seem to play almost to the end...and then leave. There are two things that I don't like about PRS is that when you use a booster...it counts as a move and when clearing 100% blocks everything counts as a block. I found that out the hard way when I left one paint can.

FHS is adorable. I like the sounds so much and everything else about the game. Daily rewards but no daily quests or game. I also like the strategy of this one especially when you have to move certain animals around the board. I will say that the sheep give me more trouble than anything else. There is also an episode race here too and top three win something. I like the companions that you collect and of course Bonnie the beautiful Unicorn that comes around once a week and gives you a lot of help. I'm a little worried though cause now I haven't seen her for over a week. Probably my only dislike about the game is there should be more moves on most levels.

💫What's your best memory with King games? And on the Community?

My best memory besides now having been chosen for MoM is when I placed in the top three in the Beat the Superstar on my 2nd attempt and I had only been on the Community about a month. Even then...I wanted that badge. That I guess was a combo answer, it involved a King game and the Community.

The Community...when I started exploring and found all these amazing threads and amazing people in them.

💫Do you have any expectations from the Community?

No... unless it's the fact that I hope that it will always be here. It truly is the sweetest place to be on the internet.

💫What do you like the most about our Community?

That's easy...the people and the atmosphere. Sure there have been some bumps, a hundred and....just kidding... let's say a few and that's not that bad when you consider how many people have come through these doors. From the CM's to the GM's to the players', you couldn't ask for nicer people. I have made a lot of friends and will more in the future. Also there is so much more to do now in the Community, games to play, contests to enter, badges to earn, competitions to join and more. It just gets better with age. I also think we have the cream of the crop when it comes to the CM's and GM's, they keep coming up with all these fun things to do and we the players say thank you.

💫If you could change anything about King (games, community, etc), what would it be?

In a perfect world everyone would get all events at the same time or close to, but I understand why they don't. On the other hand though I feel bad for the ones that don't...in the past there was a couple that I didn't get

Also I do wish they would re-evaluate the point system for badges... especially milestones and a few other high/ exceptional achievement ones. Actually I think most of the badges should be worth more than what they are.

I know the point system was just revamped as far as what level you are and the reason behind that... but I feel people that are just starting out here will look at that as unattainable. Am hoping someday soon they will adjust the points needed again to a more player-appreciation friendly amount. First though fix the problem please, we lost too many good people due to that. I would also like to see some more tiers added for the reactions' badges too.

For a specific game...easy way to travel to lower levels in CCFS 🍭.

💫How did you find the Community, how long have you been around?

When I first downloaded Friends, I wasn't good at keeping up with updates, that was in January 2019. A few months later I had some personal problems and didn't get to play every day for a couple of months and at one period I didn't play for over a month. About six months after that... October/November, I started to notice that I wasn't getting any more events. Christmas came and went and finally when the daily rewards stopped I decided to check out the website. That was February 25th or so, 2020. I immediately found the area for Friends and met Marcus who welcomed me with open arms and then QueenMia, who also made me feel like I was home. I haven't looked back since.

This is my second home and I want to say thank you for taking me in. 🤗❤️