Currently, there are five types of levels in Candy Crush Friends Saga: Free the Animals, Free the Octopuses, Dunk the Cookies, Fill the Empty Hearts, and Spread the Jam. 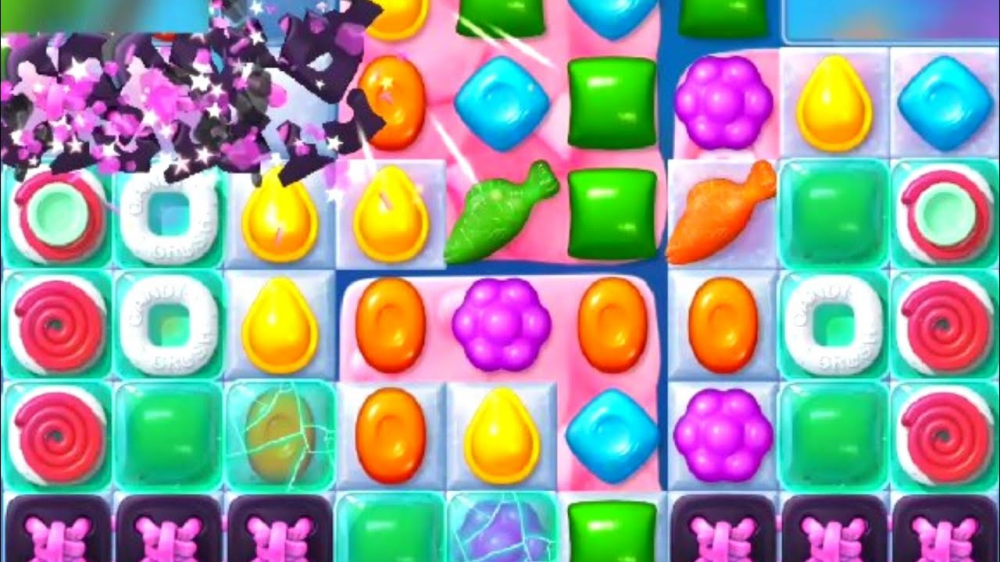 Free the Animals is a very common level type, that begins on Level 1. These levels are the only ones that feature frosting, an element that covers animals (penguins and walruses).

For most levels, working on the bottom of the board can make special candies and matches above. Fish candy and fish candy combos will often find the hidden animals, although it may clear frosting which does not cover any animals. Try not to waste your moves on such frosting. A wrapped candy set off beside a frosting piece will hit it twice but if used as a fish combo will hit only once. Wrapped candy will only hit the top when the bottom is solid ice where combo with a striped candy will go through 3 rows by 3 columns if there are no blockers but together they match great. Color bombs are even more helpful, as removing a color or combined with a special candy will generate more cascades and specials. Coloring candies can change a color of candy, but it is a much better idea to combine it with a special. This makes them the key to success. If you have no moves to break blockers or make special candies, try collecting your character's candy so special candies or blocker damage can be done. Candy trapped in ice is not set off by Color Bombs or Coloring Candy. Usually, you can free animals using normal matches. 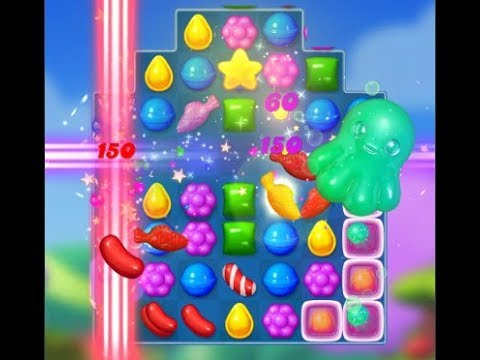 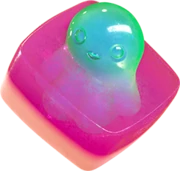 In these levels, the goal is to free all the octopuses by removing them from gummy tiles. The board of the levels can be divided into several sections and each section is independent. Gummy tiles can have up to six layers. Making adjacent matches, hitting them with a special candy, or letting jelly fish eat them will remove one layer. Crushed licorice swirls can destroy adjacent gummy tiles. Gummy tiles with two or less layers have its content visible (octopuses, normal candies, specials, blockers). Tiles with three or more layers will be hidden by a layer of yellow gummy. However, Swedish fish know what's inside and will destroy those with octopuses. 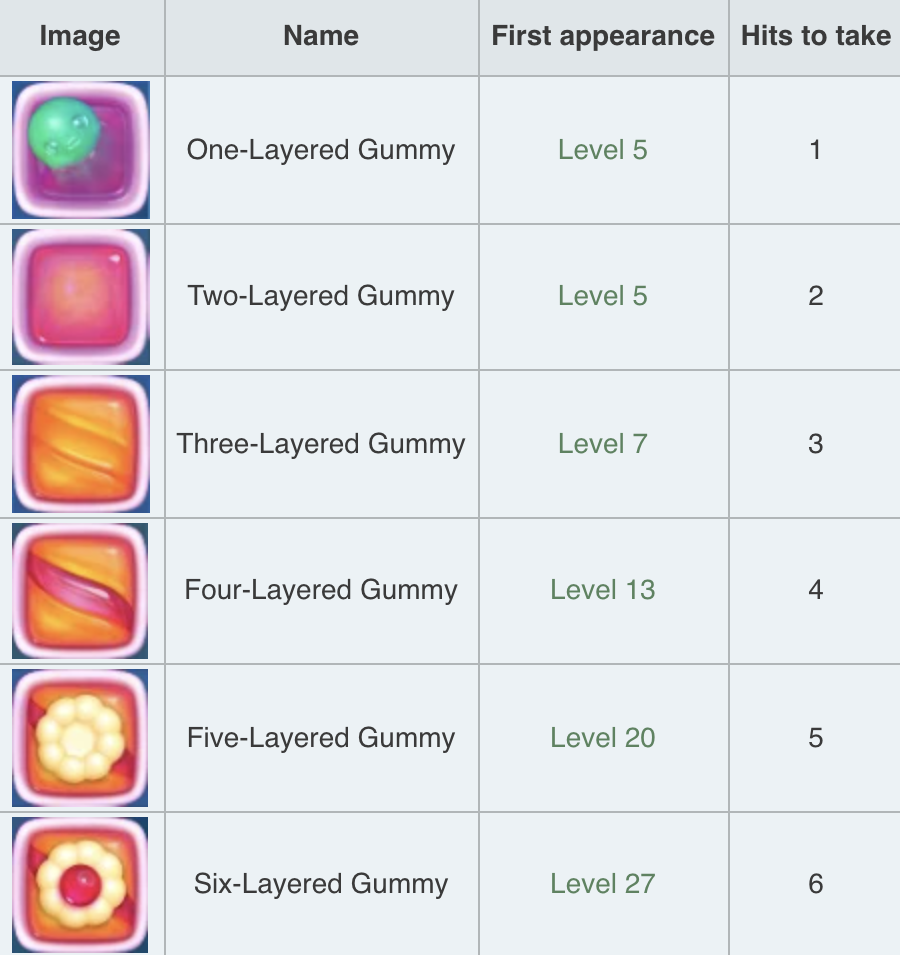 Usually, the bottom of the board is filled with gummy tiles. Make special candies to destroy the tiles, and all combinations can be helpful. Swedish fish, whether combined with a special or not, can dive right into the gummy tiles, so they don't act as blockers. 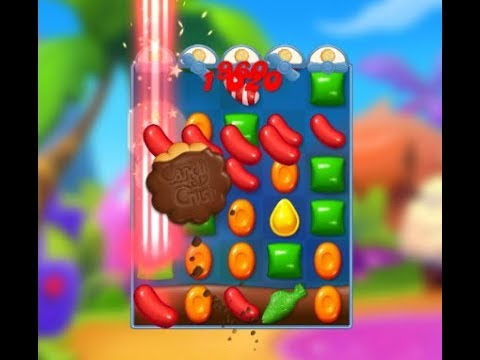 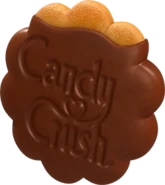 Dunk the cookie levels are a somewhat rare level type, compared to the other types of levels, and in these levels you need to bring all the cookies to the chocolate river, which is usually located on the bottom, but sometimes appear on the top with caramel cups covering it.

Cookies act like normal candies, such that they can be switched. However, they cannot be matched with any other candy or special candy, nor can they be destroyed by blockers or other elements. They also stay put during a shuffle. Cookies can move through straws, but not blockers just like candies. Once a free cookie has reached the chocolate river, it becomes dipped with chocolate and be collected and gives 10,000 points. The player must make a valid move to do so. While some levels have all required cookies on the board, some other levels will have candy cannons dispensing cookies. If there are fewer than a predetermined number of cookies on the board, new cookies will spawn right after making the next move, but not during an ongoing cascade in the same move. If there are any extra cookies left on the board after collecting the required number, they can still be dunked into chocolate during following cascades and Sugar Crush, and will still give points accordingly.

If you have no moves to break blockers or move cookies, make special candy (often fish) or collect character candy to make specials and damage to caramel cups. Clear any blockers or trapped candy under the cookie first. It's hard to clear if the blocker is in the way. Know where you need to bring them down. It's easier to move them over in the middle of the board. Fish will go to the square directly next to the cookie in the direction it is going. Work at the bottom of the board to move down the cookies. Vertical striped candies in the same column as the cookie will drop it to the bottom (if blockers are not cleared, they will get in the way), and color bombs combined with any special is also ideal. This makes special candies helpful, but they might ruin your plans, so look closely at their effect before activating them. Focus on one area so cookies drop in the same area. 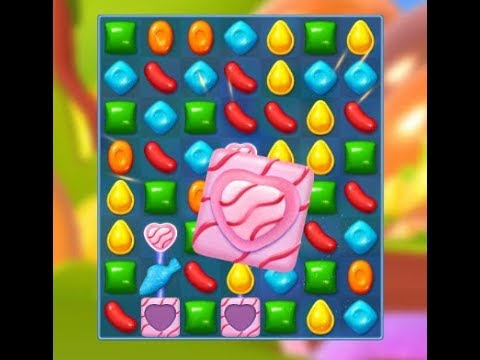 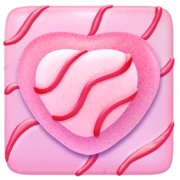 Heart levels is the rarest level type. The objective of this level is that the player must make the hearts move their ways along the track to the mold by matching candies next to them or using special candies' effect. The player earns ten points each time the heart moves.

Each heart has a pink trail that leads to a goal block. When the heart is being filled, it will move through the trail and try to destroy objects in the route. The heart can be filled by:

After the cascade ends, any filled heart will start to move. Each heart can only move 5 steps each time, but if any cascade is caused after moving starts, this can cause another one to move. When a heart moves, it will destroy any candy on the route and leave random normal candies behind. If the heart moves through weak blockers like ice and licorice swirls, they will be destroyed completely. However, if it runs into a durable blocker, like Raspberry Twister Cake and Heart Lock, it will bump into that blocker and deal 1 damage to it. The candy it leaves will never cause direct matching. This also applies to the candy left by the goal block below. Once a heart reaches its goal block, it will fill in the goal block and disappear. This will then destroy the goal block (and collect the gift box if it is tied to the block) and leave normal candies. The player gets 10,000 points for each heart filled in. In case of multiple hearts tied to the same goal block, the block will only be destroyed when all hearts have been filled in.

Put special candy in the path of the heart so they can set them off. If the player has no moves to break blockers or hit the hearts, collect the character's candy. Always aim for the heart. They will clear the blockers as they move along their line. Matching candy or hitting with a single fish will move it one square. Using other special candy except for fish candy without special candy combination, however, will move it two squares. If regular candy or special candy effect hits the heart multiple times, then the heart will move several squares based on how many times the heart got hit. However, the heart will move up to 6 squares. Using a wrapped candy fish combo will only hit the heart once but setting off a wrapped candy next to a heart will hit it twice. Using a fish + color bomb combo could only hit each heart on the board once and the rest of the fish will just hit elsewhere. There is no need to clear blockers since the hearts will do it for the player. Try to make moves that hit more than one heart at once. Use striped candy combos when the hearts line up. Special candies are always helpful. 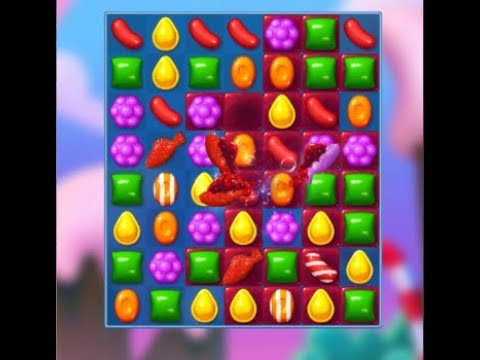 Jam levels are moderately common, and to pass these levels you need to fill the entire board with jam, which is done by matching candies or making and using special candies' effect over at least one jam square. The jam will then spread over to all candies without a jam square under them. However, if a player matches candies with no jam under them, then the jam won't spread. This is why every jam level has at least one free jam square; that is, a square that is filled with jam the moment the level begins.

When a striped candy is involved, any carrying jam is lost when the effect reaches blockers (except licorice locks). This can become a disaster by wasting moves on those blockers. Empty tiles, however, do not stop it from spreading. While it is rare, if that blocker has jam beneath, the effect will carry jam afterwards. If the effect is not carrying jam but goes through a tile with jam, it will carry jam to the remaining tiles it can reach. If it is placed on a jam tile, it will "carry" jam to both directions it goes off. When a wrapped candy is involved, it will only spread jam if it explodes on a jam tile. It does not carry jam. When a candy fish is involved: If it is without jam, it will find blockers as usual. If it is dipped with jam, it will first search tiles without jam but with candies. In this case, if the fish is also carrying a combination, the jam is spread accordingly. If a color bomb or coloring candy is involved: If they are triggered without any jam, they will not spread jam, but any affected tile with jam can be spread accordingly. If either candy in the mix contains jam, or if they are triggered on tiles with jam, jam will be spread to all affected tiles except those covered with marmalade. In a striped candy + wrapped candy combination: Then, for every border tile of the 3x3 area, apply the striped candy rule and spread jam accordingly. First, if either candy has jam, the 3x3 area of the combination will be fully covered with jam, if possible. In this case, jam can be spread to tiles with locked licorice swirls. Otherwise, the jam will not spread in this process.

If you have no moves to break blockers or spread jam make special candy or collect your character's candy, like always. Working on the bottom of the board can spread the jam in the squares above and clear blockers. Use special candies and combinations to hit the areas you can't reach or make a match in. Narrow areas are harder to match in, so check there before moving for a match. Remove licorice swirls and blockers so they are out of the way of your special moves and give more room to make special candies. On purple jam levels, make special candies nearby the blockers to open space and when there are enough jam squares at the bottom, use fish candies to spread the jam at the top board.