According to Mr. Toffee, Tiffi triggered a ‘great scramble’ causing a tear in the sky. Down, down, down she fell into the Candy Kingdom triggering the ultimate board game mash up catastrophe. And this is where our story begins…. 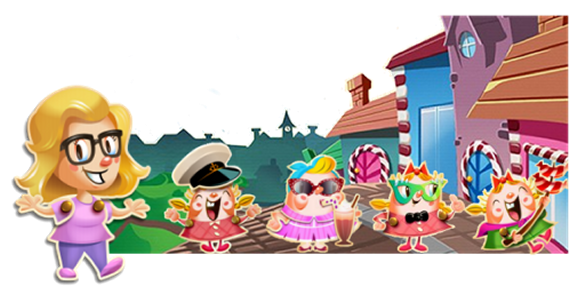 Meet Tiffi who is 6 years old, and 2’ 9” tall. She is very short, so short that it would take six of her to equal the height of Mr. Toffee. She is cheerful, naïve and reckless. Her hometown is Candy Town, but she lived in New Jersey at one time. She likes being active and new things. She dislikes being still and boring things. Her family consists of her older sister Kimmy and her adopted father, Mr. Toffee. She is friends with the friendliest characters. Her birthday was revealed to be 23 January, on the official Candy Crush Saga Facebook page. Her zodiac sign is Aquarius.

Tiffi is the kind, but reckless. She is the adoptive daughter of Mr. Toffee. She was brought to his doorstep in a bag of candy, together with her older sister Kimmy. She wants life to be a constant adventure! While she is genuinely kind, and always offers her help without expecting anything in return, what really gives her a kick is the appreciation she gets from others after helping them. Tiffi accidentally caused the Soda flood, which we see in Candy Crush Soda, when she made the machines in the Candy Factory so effective that they exploded! She still has no idea that happened.

Start at the beginning – Welcome to the Candy Kingdom Chronicles!