Originally from the Candy World, Soda World was eventually mixed and transformed into a Soda world. If you remember from 'Chapter 1, How it all began', Kimmy went downstairs looking for Tiffi. The soda machine was tilted and then fell down. She landed in the fountain in Candy Town splashing Mr. Toffee with soda. Perhaps this was the beginning of Soda World, but then in the 21st episode, Soda Splash, Tiffi is trying to take the candy cane out of the twist. Genie Jellybeanie tells Kimmy "Tiffi's fixes were too much. That's why the present is so soda-soaked." I couldn't get trivia on how it turned into Soda World but both of these explanations make a lot of sense.

Kimmy is the main character in Candy Crush Soda Saga. As you already know, while looking for her sister, Tiffi, she fell into the Candy Kingdom and her life hasn’t been the same since.

She is strong-willed, independent, and has a great sense of justice. Her best traits are being courageous and loyal. However, her worst traits are being impatient, and she thinks inside the box. She is competitive and enjoys a good challenge.

She learned a bit of Swedish by playing the board game Norse Myths. Her favorite word is Loss… (roughly meaning “soda pop”). If you click Kimmy on the diorama map, she actually says "Åh Läskeblask!" She is great at martial arts and has many masters around the Kingdom that are happy to train her.

She shares the same diet as her sister eating 500 swedish fish per day because they are good for her joints. Morever, she drinks 100 liters of soda a day because it keeps her on her toes. Her birthday was revealed to be November 12, on the official Candy Crush Soda Saga Facebook page. 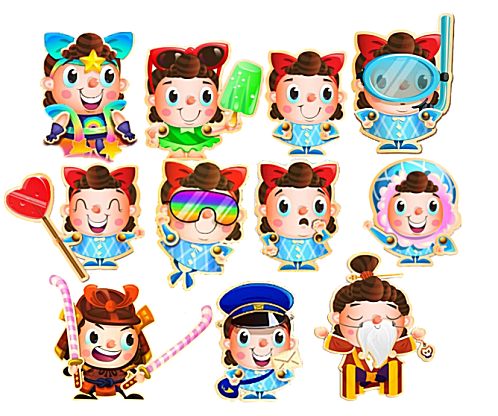 or Start at the beginning – Welcome to the Candy Kingdom Chronicles!