Kimmy and Grogu begin to walk through the Soda community where they meet up with @Nix66. 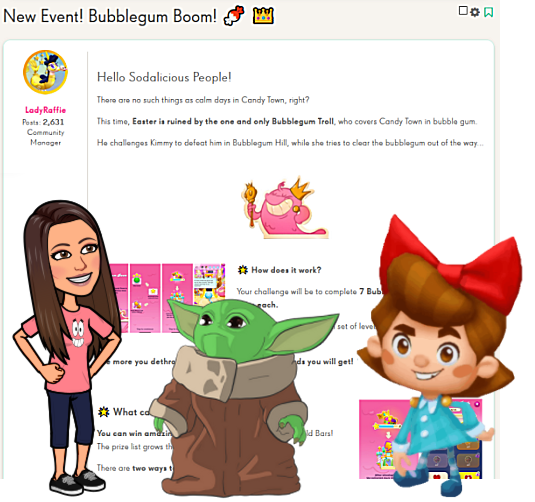 Kimmy tells her that his name is Grogu and he’s from a galaxy far far away.

“He came here because there is a National Star Wars Day next week and he wants to meet the fans,” Kimmy says. “He got lost and ended up here, so I am going to try to find out where he was supposed to be going.”

Nix66 tells Kimmy that she remembers seeing him in the Mandalorian series.

“I’ve seen all the Star Wars movies,” says Nix66. “As a matter of fact, @LadyRaffie is a big fan of those movies too.”

“I never heard of Star Wars,” says Kimmy. “What’s it all about?”

‘The movie revolves around a civil war taking place "in a galaxy far far away." The Rebels are fighting against the nefarious Darth Vader and his Imperial forces from the Galactic Empire, a tyrannical army intent on destroying civilizations across the universe. Princess Leia is head of the Rebel's Alliance and manages to steal Imperial blueprints and details about a deadly weapon and space station called the Death Star. When she is captured by Imperial forces, she puts the plans in the memory of a droid, R2-D2, who escapes with another droid, C-3PO to the planet of Tatooine.

Jawa traders find the droids and sell them off to farmers Owen and Beru Lars. Owen and Beru have a nephew, Luke Skywalker, who is in charge of cleaning the droids and readying them for work on the farm. While cleaning the droids, Luke accidentally opens Princess Leia's message, which states that she needs help from Obi-Wan Kenobi. Luke and R2-D2 find a man named Ben Kenobi who reveals himself to be Obi-Wan, a former Jedi Knight whose duty was to maintain peace in the galaxy by using special powers from something called the Force. The Jedis were destroyed by the Empire and he has gone into hiding. Obi-Wan also reveals that Darth Vader killed Luke's father, and gives the young farm boy his father's lightsaber, a powerful, sword-like weapon.

Leia's message asks Obi-Wan to travel to Alderaan with the plans to give to her father. Luke decides to go with him, and they set out to Mos Eisley, a spaceport town, in search of a pilot who can bring them to Alderaan. They employ Han Solo, a sardonic smuggler, and his furry companion, Chewbacca, to take them to Alderaan using his ship, the Millennium Falcon.

When they arrive at Alderaan they discover that it has been completely destroyed by Grand Moff Tarkin and Darth Vader using the obliterating powers of the Death Star. Luke, Chewbacca and Han Solo sneak onto the Death Star, where they rescue Princess Leia and get on the Millennium Falcon. On the Death Star, Obi-Wan is able to disable the tractor beam, but in a duel with Darth Vader, he is killed.

The Millennium Falcon travels to the rebel base, where plans are being hatched to destroy the Death Star, using the blueprint stored in R2-D2. Luke is at the forefront of the mission to destroy the Death Star, and with the help of Han Solo as well as the spirit of Obi-Wan Kenobi reminding him that the Force is always with him, Luke successfully blows up the giant Imperial space station.’ (Source)

Grogu finishes the story and looks at Kimmy. She looks so confused with all this information. He tries to think of another way of explaining it to her. Nix66 tells Kimmy that she’ll be back in a jiffy because she wants to hear what Grogu has to say. She wants to get an ice pop and asks Kimmy if she’d like one too.