Cowgirls In The West

Back at home Olivia calls Tiffi but her buddy is not home so she leaves a message to call her back.

She is now a cowgirl! But is she? She decides to go online to do some googling on cowgirls.  Cowgirls In The West catches her eye so she begins to read it. 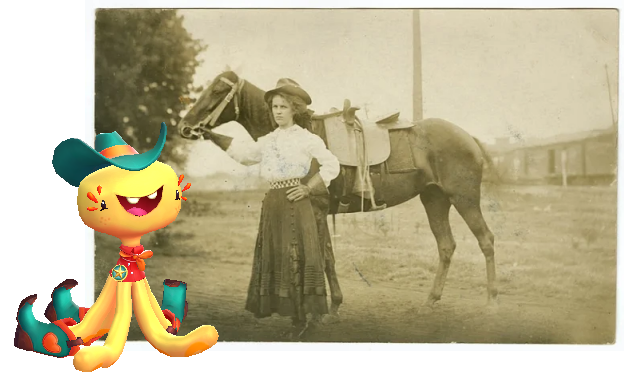 ‘Ask someone to name a symbol for the American West and before long “cowboy” will be mentioned. Since we’re chatting about women in the west.

Were there really cowgirls in the 19th Century or were they sort of an Old West myth? What did they do? How did the idea of cowgirls gain popularity? Here are a few facts and thoughts:

Life Was Hard & Necessity Pushed Societies Boundaries - Settling on the frontier was settling in a wilderness. Whether the pioneers intended to farm, ranch, pan for gold, set up shop in a town, were with the military, or built the railroad, living conditions could be rugged.

Life in the west could push boundaries. Necessity could force a woman into a leadership role that would’ve been frowned upon in the east. How about this example: pioneer woman’s husband owns a cattle ranch. They’re just about to make a significant profit with their herd when he has a fatal accident or contracts a deadly disease. Pioneer widow had two basic choices: work harder and try to keep her property or seek refuge and charity elsewhere. Many women chose to stay where they were already settled, taking – from necessity – a new role; in this case, overseeing a ranch at least until she could hire someone else.

Women & Ranches - We know that women oversaw cattle ranches and cowboys when their husbands were away or had died. Also, in the west, a ranch couldn’t always afford to hire more ranch hands, but if the wife or daughters knew how to ride and rope they might end up helping on the property.

Usually, it was from a practical situation or from necessity that women became involved in “cowgirl” duties. “Cowgirl” wasn’t really a “career” option during the 19th Century, but the pioneer women would “cowgirl-up” and tackle whatever work had to be accomplished for the good of the family.

Cattle Drives? - Cattle drives were when the livestock was moved from the ranch to a railroad where they would be sold and transported to be butchered. Unlike a round-up on the ranch, a cattle drive moved the livestock from Point A to Point B, not just gathered them to Point A.

There is not an abundance of proof that women took part in cattle drives. Likely there are some good stories, even true stories, but it’s just not the majority. While a woman or girl might help move cattle, mend fences, work with horses, and other tasks on the ranch, a cattle drive presented additional hardships, and it seems likely not many made that journey.

Annie Oakley was a sharpshooter in a wild west show.

Wild West Shows - The idea of a “cowgirl” gained popularity with the advent of Wild West Shows. These were shows that supposed presented “real-life” in the West; however, we have to remember: they were SHOWS. Thus, just because there were many cowgirls in these shows, doesn’t mean there were lots of cowgirls roaming the ranges.

The cowgirls in the western shows were talented and performed western skills with flair. Shooting, trick riding, roping, and other activities were performed well by these tough women in show business. And they introduced world-wide audiences to the image of a cowgirl – whether or not it was actually factual and common on the real ranches.

However, the women on 19th Century ranches certainly passed on a good legacy and examples of hard work, practice, determination, and courage. When a job had to be done, these pioneer women were not afraid of what people might think – they’d just saddle-up and help get the job done. And that’s a fine example in any era!’ (Source)

Interesting article but it has not pleased Olivia enough to learn about cowgirls so she continues searching. She keeps noticing articles talking about a rodeo cowgirl so she has to search to learn more about rodeos.

Start at the beginning – Olivia wants to become a cowgirl