Please only post ideas on how we can improve the game Candy Crush Friends and take a look at the Master List of Ideas before posting
Looking for help? Check our Support and FAQ 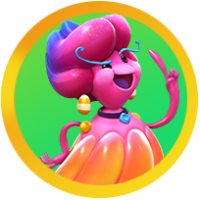 I know this will never happen but it's still cool to think about. I'd love to see Mr.Toffee himself be a character helper? Is that what you call them? Anyways, I think since he is the king of candy kingdom He would probably need 1000 stickers to unlock him. There's a catch, you need to be on level 2000 to be able to obtain his rare stickers. Or, you could acquire stickers by playing his boss battle events. A Boss battle event is where you compete against Mr. Toffee in split-screen levels. There are two boards for each level, one is yours(the player) and the other is Mr. Toffee's. The key to winning is to complete the objective before Mr. Toffee does. These split-screen two board levels have are special though, as you create and use special candies you add points to a meter that the player and Mr. Toffee can use. The meters are called Toffee meters, when they're completely filled; they will create a random toffee candy obstacle for the opponent to deal with which would be placed randomly but in a way to get in your way in some shape or form. When you win you'll get a toffee present/gift box that has Mr. Toffee stickers which could have about 50-100 stickers but it's random. The Mr. Toffee tournament(that's the new name I'll call this event) introduces a newly charged candy power-up where you(the player) are immune to every other obstacle Mr. Toffee throws at you when the Toffee Meter is full. last but not least each level will give you 30 moves to break those obstacles being thrown at you.

How would Mr. Toffee work? His candy meter will require either 15 or 20(probably 20 lol) candies to fill his mete. His ability could be the same as Misty's where she can throw all special candies at random. To make Mr. Toffee a little more unique, every time you fill up his candy meter and he throws his special candy on the board the meter will change to a different color needed. For instance, you need 20 green candies, and when you complete the meter Mr. Toffee will use his ability and the type of candy required will change to red candies. So, this means that every time you use his ability the type of candy needed will change. This makes Mr. Toffee a little difficult to use since some levels have a higher drop rate of certain candies. Also if you don't like the idea of him having the same ability as Misty, then Mr. Toffee could put either a Color Bomb or a Coloring Candy. This is the end of my idea. Hope you enjoyed and please tell what you think about it or how you could my my idea better