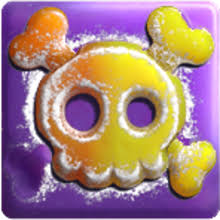 Hello everyone! Starting from Level 8031, you will find a new blocker called the Sour Skull.

Relationships to other Elements

The concept of this element is similar to the toffee tornado. However, it can move in a fixed position (it can only move to other skull pedestals) and only when hit. Toffee tornadoes, meanwhile, can move to almost any random tile every two moves. Also, skull pedestals flash to let you know which one the sour skull will be on next time it moves, while toffee tornadoes don't give any indication as to which tile they will move to next. Like sugar chests, rainbow rapid's mold and order locks, the skull pedestal is an encasing blocker that can only be removed by clearing a certain element. Once the sour skulls were hit 5 times, the pedestal pops, just like the bubblegum pop popping. When the sour skulls were cleared, it did not clear jellies behind the blocker itself, unlike bubblegum pops. It sometimes clear like rainbow twists, when a group of twists cleared and it doesn’t clear jellies. Sour skulls sometimes look similar to a rainbow twist grouping together. Like crystal candies, they are required for candy orders in the first level they appear in. Unlike just about every other element that can be required for candy orders, this one always requires the same amount in each level (5 sour skull layers). This is because sour skulls always have 5 layers. This can also extend to levels where order locks need sour skull layers to unlock but there are levels where less than 5 sour skull layers are required to unlock the order lock. An order lock that requires 5 sour skull layers to unlock will function the same way as a skull pedestal that the sour skull cannot land on.