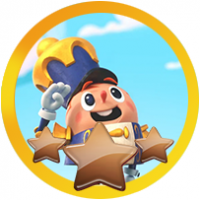 Sofia1992 Posts: 2,494 Superstar
January 2020 in Candy Friends Stories
Hello everyone and Happy New Year.
Welcome to my 'Analysis, Theories and facts about our favorite Candy Crush Characters' with me, Sofia1992.

This time (I'm sure that everyone waited for this) , we will talk about a very special character.
A character who everyone loved and he appeared in all Candy Crush Games.
It's time to talk about Mr.Yeti.

Yes, exactly. Mr.Yeti will gonna be the next one who I will gonna analyse in this discussion. I hope to enjoy it!
So, let's get start this.

Mr.Yeti is one of main characters in all Candy Crush Series and the character who came from Yeti's Trap game along with the other Yetis too.
He is Tiffi's best friend in Candy Kingdom and he loves to go in adventures with her.
And according to @Elsa 's stories, Mr.Yeti is 900 years old and he is 6’ 6” tall and weighs 800 lbs and that made him the oldest character in Candy Crush Series (while the youngest one is his best friend Tiffi) .

Personality:
Mr.Yeti's personality is a very sweet one that all the players noticed when they played all Candy Crush Games.
Mr.Yeti is one of the coolest guys in whole Candy Kingdom.
Also, he is friendly, clumsy, helpful, protective and a very sleeping one. Yes, he loves sleeping a lot and he loves to lay back and sleep almost everywhere with the first chance especially after eating his favorite chocolate so, he has and a big appetite too.
Although Mr.Yeti is very very friendly, still in real danger he will protect his friends with any cost (and that includes and all the Yetis from Yeti's Trap Game and her small niece Jenny) .  With few words, Mr.Yeti is tough and strong but behind his big muscles, he has a very big heart.
A heart full of love and care for all his friends who live Candy Kingdom.
And don't forget to add that Mr.Yeti is very funny too. He wouldn't like to see her friends sad and especially Tiffi so he will gonna wear his clown outfit and make her laugh a lot.
Despite of his brave nature, still he has some anxieties who tries all his best to overcome according to the description of CCFS:
1) The hunters who chased him down when he was in Yeti's Trap game.

2) Jelly Queen and whatever has to do with Jelly. Exactly! Mr.Yeti's biggest nightmare after hunters is nothing and noone else than the evil Jelly Queen. In Candy Crush Jelly Saga, Jelly Queen kidnapped poor Mr.Yeti while she tried to jellify everyone in Candy Kingdom.

3) If someone find his dice. Yep. Mr.Yeti has a dice which it came from the game 'Yeti's Trap' that he was. Few weeks after Mr.Yeti came in Candy Kingdom though the portal, he and Nutcracker found his dice. According to Mr.Yeti, someone rolled up his dice three times and in the three times, he ended up in a trap.
Exactly, there is a video for proof.
https://www.youtube.com/watch?v=W75LD_Ly9sc

4)Nightmares. As we all know, Mr.Yeti loves good sleep but if he sees a nightmare, he will become very upset and after, he will not be able to sleep again unless if he eats a certain amount of chocolate.

5)Whatever reminds him his past. Mr.Yeti actually suffers from PSTD (Posttraumatic stress disorder) because he exposed to a traumatic event or better to say two traumatic events on his life. The hunters who chased him down every day and Jelly Queen who kidnapped him and jellified him so yes, it's better not to ask him about these two events since they will make Mr.Yeti very very nervous.

Now that we analysed Mr.Yeti's top five fears that cause him anxiety, it's time and for the facts about him.
1)Mr.Yeti has his own shop in CCS and CCSS.
Exactly. Mr.Yeti has in Candy Town a shop with all the good things.
From boosters until gold so a player can buy many cool things in both games.

2)Mr.Yeti loves to sleep a lot and he can sleep everywhere and especially in CCS, we can see him that he sleeps in Chocolate Mountains and in Toffee Tower. Oh and if you wonder what happened to him after he fell from Toffee Tower, the answer is simple. He fell in a big, soft candy cloud and he slept there. So, he is safe and sound. 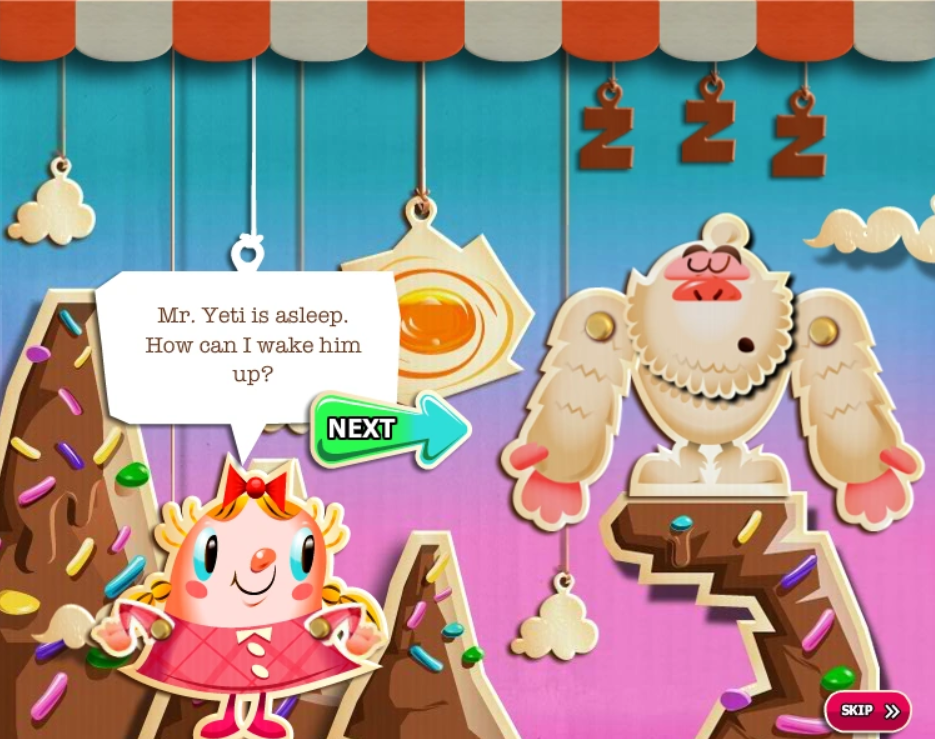 3)He bathes in a big bath of soda, five times a day because it makes his fur sparkle. But after his bath, he always need some help from Jenny or Tiffi in order to comb his fur and make it untagled.

4)He and Tiffi are best friends and if you count and Kimmy, then why not? Also, don't forget to say that Mr.Yeti is best friends with Mr.Toffee and they know each other very long time. 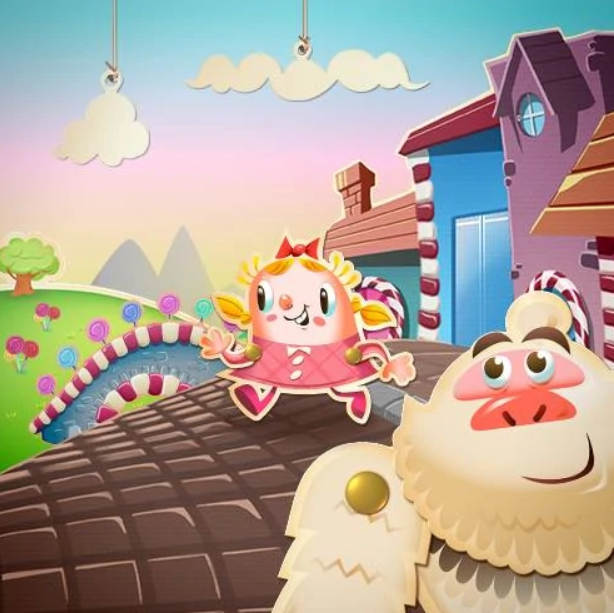 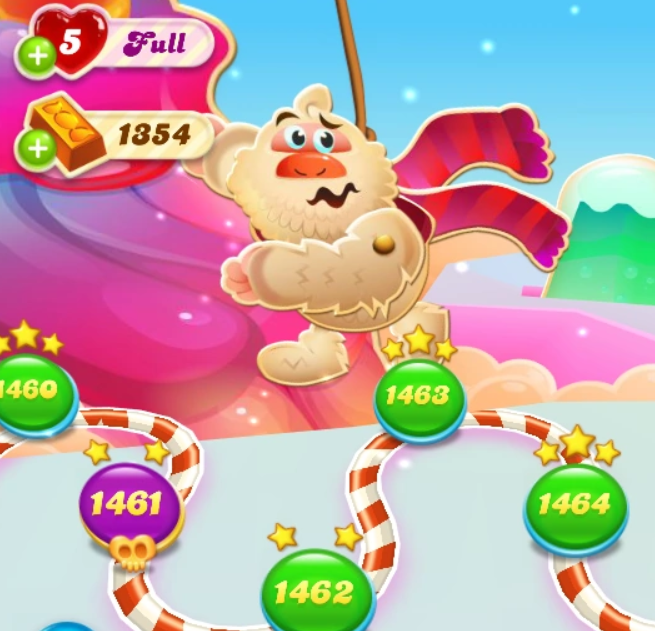 According to this episode, we will Mr.Yeti to say this:

Before episode: A mad jelly genius is trying to jellify everyone, I can't let her get away!

After episode: I'll be fine, mountains are my thing! It's just "so" slippery!

Doesn't something of that episode ring a bell on you? Ok, I will help you.

The mad jelly genius that Mr.Yeti was talking about is noone else that Jelly Queen. Exactly! Jelly Queen and the story goes like this:

'As Kimmy continued her journey, she noticed that Mr.Yeti started to climb in those Jellycious Mountains. When Kimmy shouted at him and asked him what exactly he was doing here, Mr.Yeti said to her that as he continued the searching for Tiffi and his searching took place in Chocolate Mountains this time, he noticed something strange up to the Jellycious Mountain where is next to Chocolate Mountains. He noticed a female figure, a very mad jelly genius and that genius figure uses her scepter to jellicy everyone so noticing that, Mr.Yeti couldn't just stay here and do nothing and he needed to do something so to stop this mess. After that, Kimmy asked him if he could follow him but Mr.Yeti refused and said to her that he must continue her journey in order to search for her sis Tiffi. Also, he told her that he will be fine and he will continue his climbing. Kimmy couldn't do nothing else but agreed with Mr.Yeti so he continue her journey while Mr.Yeti continue to climb up there in order to stop that Jelly genius and save the Candy World. '

The place which takes part in this episode is similar like Candy Crush Jelly Saga game.6) And for his love on chocolates, the good sleep and his friends, Mr.Yeti loves yoga cause it makes him to relax and control his fears and his big appetite.

7) Except from his friends and his Yeti buddies, Mr.Yeti loves to help jelly animals in CCFS. With his new power of throwing a wrapped candy in 'free the animal' and 'free the octopus' levels, we will see that Mr.Yeti will get so excited every time when he frees those animals.

Well, that's all for Mr.Yeti. In the next part, we will see the story of how he ended up in Candy Kingdom and his role in all Candy Crush Games.
January 2020

Sofia1992: ~ A sweet girl, full of love and passion for Candy Crush Games and Community too!~
☆And...Friend of Friends, full of imagination and creativity!☆