Analysis, Theories and facts about our favorite Candy Crush Characters - Nutcracker (Part 4A) 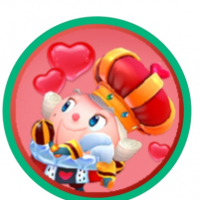 Hi everyone. Welcome to 'Analysis, Theories and facts about our favorite Candy Crush Characters.

Well, the time that all of you waited has finally come. To analyze Nutcracker's outfits in CCFS. So, let's begin!!!

As we know , Nutcracker has the most fabulous outfits in whole game and he has 13 outfits in total (actually 9 and if you put and his original soldier uniform 10 plus the 3 ones from the achievements...13 in total) . Yes, he is the only character who has so many outfits. Wow!

So, let's analyze them and let's analyze first, his outfits from the game (The first six outfits that I will gonna analyse them below , you can earn them from daily gifts...and one of them appeared in a certain update only. You will understand soon. Anyway, in order to get those six outfits, you must collect enough stickers of them and they will be yours!

And don't forget that I will gonna mention and Nutcracker's three extra colorful outfits which you can earn them from achievements only.)

Nutcracker--> 20 stickers and if you go right, you will get him at level 25 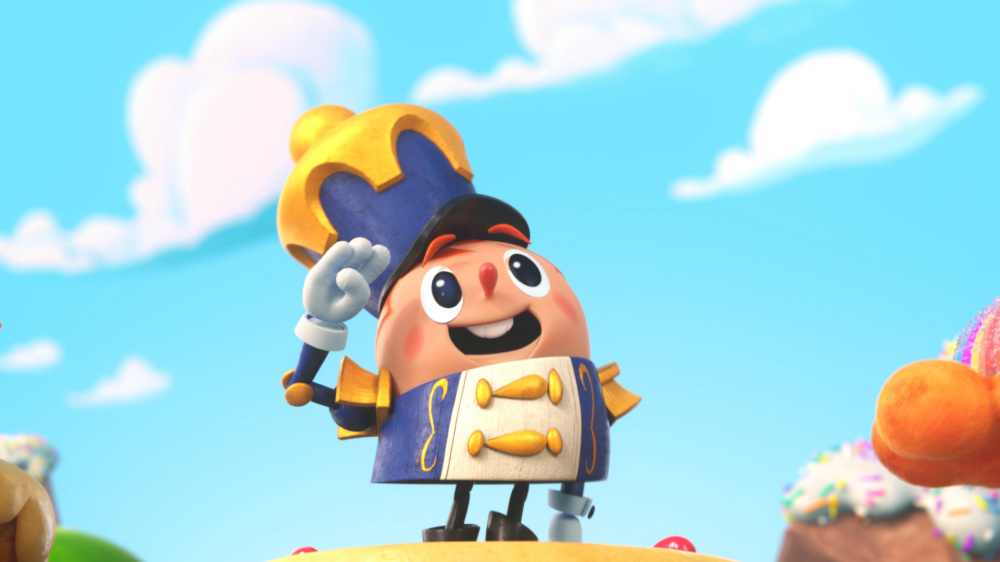 Nutcracker as everyone will gonna notice, he wears his special soldier uniform and he is ready to serve the country (ehhh....I meant to help everyone around in Candy Kingdom)

Also, don't forget to mention that Nutcracker's original soldier uniform has 3 extra colors. Silver, Gold and Rainbow. And how to get them? Easy!

After opening Challenge Mode/Achievements (you can unlock it after passing few levels and making progress in the game), you can get silver, gold, and rainbow costumes. 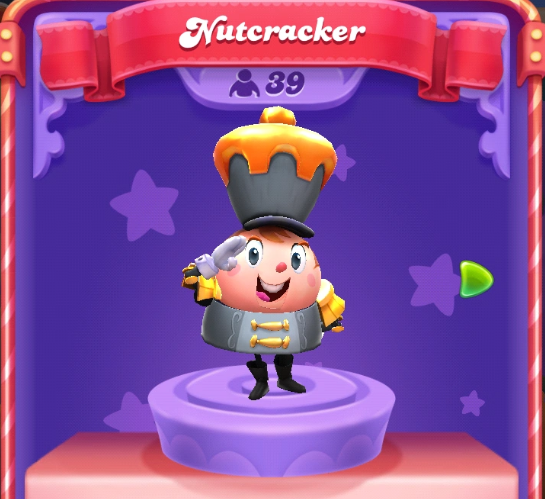 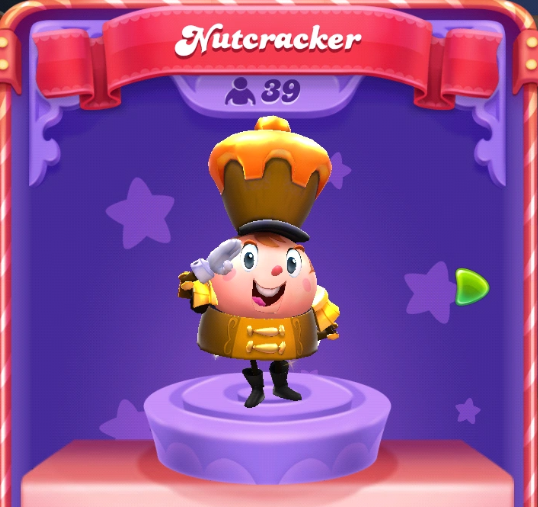 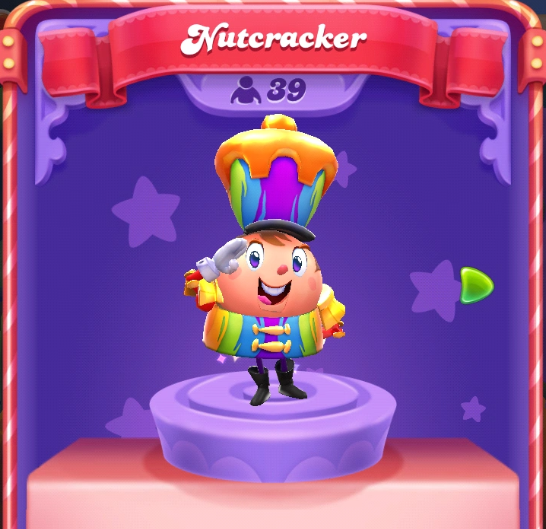 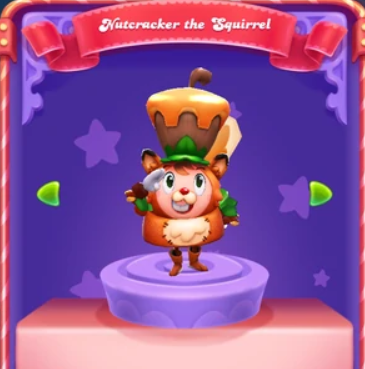 Squirrel is the first Nutcracker's outfit that you will unlock in the game.

My opinion is that Squirrel Nutcracker is adorable and fluffy. I don't know why but when I play with Squirrel Nutcracker, I want to pat his head or his stomach or to hug him and hug his fluffy tail (and between us, I love his victory dance which is ballet with this costume. So wonderful and entertaining at the same time) .

Squirrel Nutcracker pulls out a giant acorn and proudly holds it wagging his tail as he wait for you to finish collecting his candy. When you do he does a spin tossing the acorn to the board.

Victory Dance: A ballet dance is how Squirrel nutcracker celebrates. 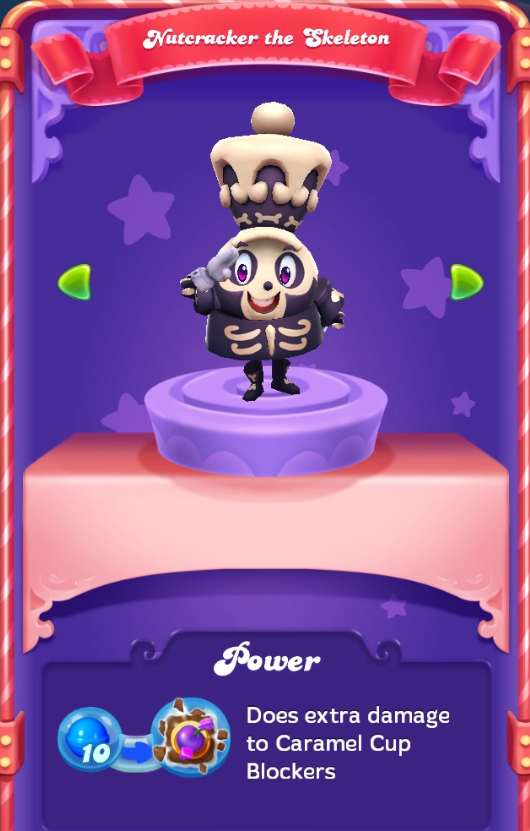 Skeleton is the second Nutcracker's outfit.

My opinion is that this Nutcracker's outfit is neutral for me. Well, I tried it once but to be honest, I prefer to use it in Halloween only. I think for that case, Skeleton Nutcracker is fine.

When there are 3 candies left to collect the Skeleton Nutcracker pulls out 2 bones that have an aura about them and gets ready to throw... which he does when his candy meter is full.

Victory Dance: He does the same dance as with no costume which like a hip hip hurray fist pump into the air. 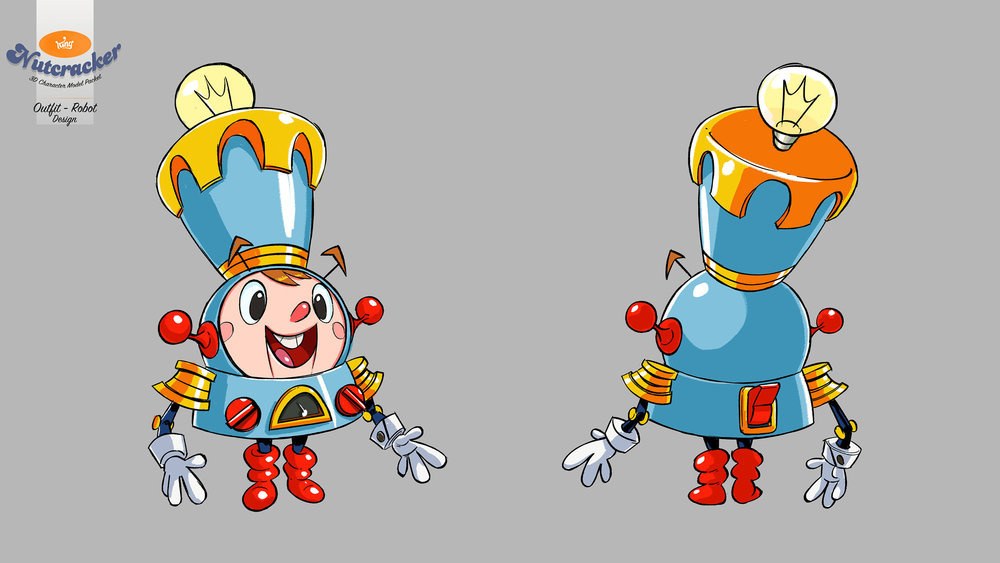 Also, I love how he gathers all his energy and after he unleashed it in the panel. So strong and so dynamic, Robot Nutcracker saved me alot of times so I own him so much.

Special Move Animation: Nutcracker Robot will turn his shoulder in while he gathers energy waiting for his candy. When ready he jumps into the air and spins like a top releasing the energy towards the board.

Victory Dance: Breakdancing floor spins is how he celebrates finishing the level. 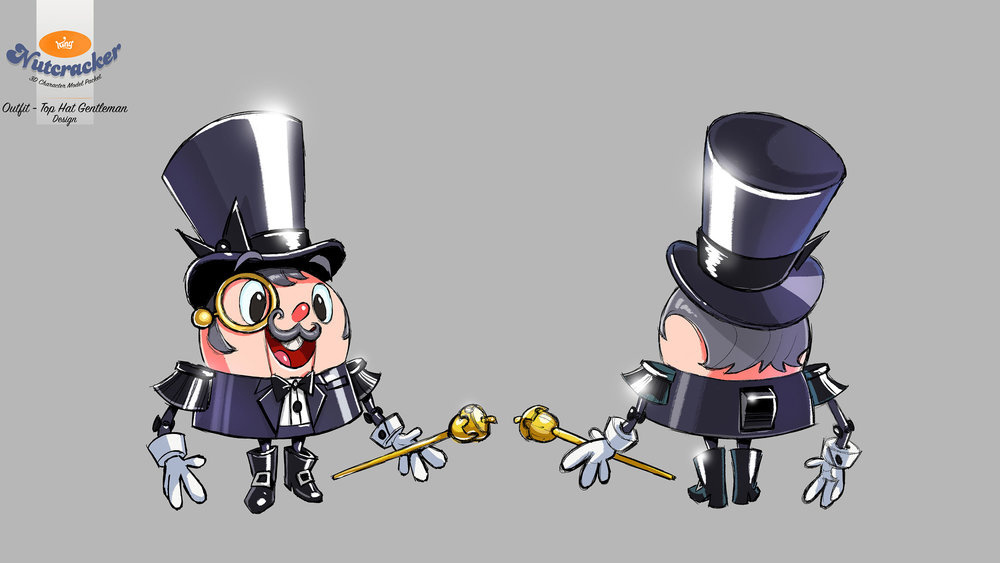 So perfect, and gentle and even more elegant and sweet just like Nutcracker's personality, Gentleman Nutcracker is another perfect outfit. It's just wonderful and dynamic at the same time and I really love the animation of this costume. Seriously, I feel so calm when I look at him....seriously, very very calm somehow and even if I lost a level with Gentleman Nutcracker, still I feel calm. Anyway, still it's a perfect one and I love how he tosses his coin at the panel and hitting 5-6 blockers in a row. Nice one!

Special Move Animation: In his Gentleman costume the nutcracker pulls a coin from his pocket and repeatedly tosses it with his thumb and catches it while waiting. Once his meter is full he tips his top hat and tosses the coin at the board.

Victory Dance: As a gentleman the Nutcracker likes to tap dance.

And now...we will talk for a special outfit which appeared in April Fool's Day 2019 and everyone thought that it wasn't real. But check it though!

Exactly! This one! Nutcracker who is dressed as Mr.Toffee and don't ask me why! Anyway...

The Nutcracker will take off his Mr. Toffee fake mustache and wave it around until his candy meter is full. He then tosses the mushtache to the board.

Victory Dance: Mr. Toffee kicks and pumps it in his dance.

Ok...In the next part of this tribute, we will gonna analyze the last four Nutcracker's outfits from special events!