So what, exactly, is fire?

Out of the corner of her eye she sees an article asking what fire is. She has to check it out! 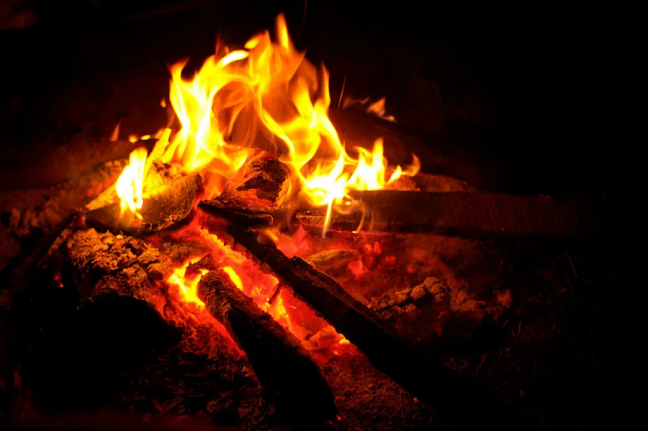 ‘When you look at flames, you are seeing the results of a complex chemical reaction called pyrolysis. You’re seeing wood turned into gas, gas ignited by heat, and light from the excitement of electrons.

Here’s another way to think about it: The entire process of a fire is about tearing a log into as many pieces as possible. The tearing releases chemical bonds, expending energy as heat and light.

But anyone who has tried to ignite a whole log with just a single match knows that it takes a lot to get a fire going. You can’t do it with a single match or spark from a piece of steel on flint.

You have to take a tiny bit of energy and transform it into a self-sustaining reaction. Each component of the wood has to absorb enough heat to begin the pyrolysis process.

Here’s how it goes: As plant fibers heat up, the plant’s tissues — mostly made out of a molecule called cellulose — start degrade and break down. As the tissue gets hotter and hotter, water is driven out of the cells, and they then break apart, forming volatile, combustible gases, “just like a burner from your stove,” John Bailey, a professor who teaches fire science Oregon State, tells me.

Igniting those gases releases some energy, which then can be used to break down more cellulose and generate more combustible gases and heat.

All of this needs to be done in the presence of oxygen, as fire is an oxidation reaction. (The oxygen bonds with the carbon in the wood to form carbon dioxide, and releases heat and water along the way.)

The ignition of the gas continues the process of breaking down that log further and further. Inside that gas are actually hundreds of carbon-based compounds. Some of these form soot and then are broken down further in the flame. If a fire burns perfectly, the log will break down all the big molecules into carbon dioxide and water vapor.

But why does this process create light?

It comes from the electrons releasing extra energy — going from an exited state to a less excited state. (You know how metal glows when it’s heated red-hot? The same thing is happening in the flame, but instead of metal, it’s the tiny particles of soot absorbing the energy.)

A final mystery: Why do marshmallows catch fire?

A marshmallow is made up of gelatin and sugar. Sugar burns at around 350 degrees Fahrenheit. A campfire can top more than 1,000 degrees. That’s why it takes Jedi concentration to heat a marshmallow over a flame (but not too close!) so it oozes instead of cinders.’ (Source)

Very interesting information! She would not suggest anyone struggling with pyrophobia read it. It would definitely causes some uneasiness. She continues her search.