The Origin of Us: Campfires As The Bedrock of Human Civilization 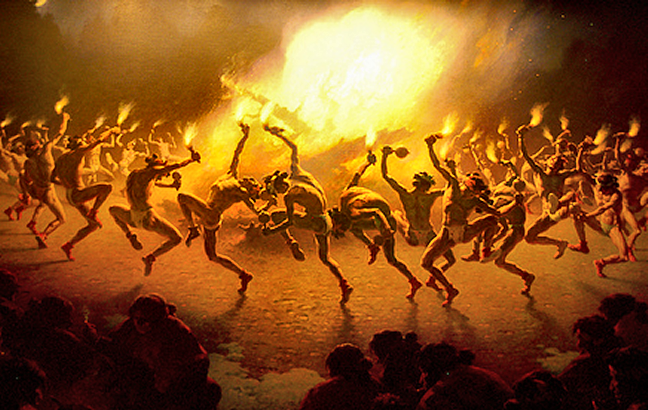 ‘Campfires provided an important evolutionary step in group-bonding that likely influenced the development of society and civilization as a whole.

If you want to understand who we are as human beings, a good question to ask yourself is “Where did we come from?”

And to begin to find an answer to this big and daunting question, it’s helpful to discover more about our history and past, especially the evolutionary origin of our species and civilization as a whole.

In The Social Conquest of Earth, legendary scientist Edward O. Wilson provides us an intriguing glimpse into the story of where we came from, what shaped us into who we are today, and what natural forces contributed to our advancements in society and civilization. Like many familiar stories of our origin, it begins with our ability to create fire and control it.

The first use of fire was likely from lightning strikes, which were helpful to flush and trap prey who’d run away from ground fires. Many animals would become cooked by these fires which likely sparked our interest in cooking meats and vegetables. This was also an easy way to get bones that could later be fashioned into tools.

However, once we learned how to create fire and control it on our own, this led to the development of campfires and campsites, which – as I will try to explain – was likely the first step toward how our civilization evolved into what it is today.

Eusociality, nests, and campfires - Eusociality is a high level of organization among animals where individuals are highly cooperative and altruistic, often acting to benefit the group over self-interest. It is a very rare form of social evolution that is often only studied in insects (like ants and bees, who work solely for the benefit of the colony).

Edward O. Wilson is an evolutionary biologist who specializes in studying eusociality in the animal world, particularly in ants and other eusocial insects. However, throughout the book he demonstrates many interesting similarities between insects and humans that might help explain our evolutionary origin.

First, he shares the key characteristics of “eusociality” here:

“In all of the animal species that have attained eusociality – all of them, without known exception – altruistic cooperation protects a persistent, defensible nest from enemies, whether predators, parasites, or competitors. Second, this step having been attained, the stage was set for the origin of eusociality, in which members of the group belong to more than one generation and divide labor in a way that sacrifices at least some of their personal interests to that of the group.”

According to Wilson, campfires and campsites can be seen as a type of “nest” that helped introduce the human species down a more eusocial path of development.

In many ways, campfires were a significant step in “group bonding” within our species. They were common places to share food, tell stories, learn from each other, and begin to form strong bonds and loyalties with the group.

Once we set up campsites, it became easier for division of labor too. Some individuals would stay at the “nest” to raise young or protect it from potential invaders, while other individuals would forage for food, hunt for prey, and bring the bounty back for others.

Over time our “nests” became increasingly more complex and sufficient, especially with the rise of agriculture and being able to grow our own food. Instead of the next generation starting their own nests, they would stay with their groups and continue building together across generations.

All of these factors were huge leaps toward the beginning of society, culture, and civilization. And in an odd way, they were all sparked from the invention of a simple campfire.’ (Source)