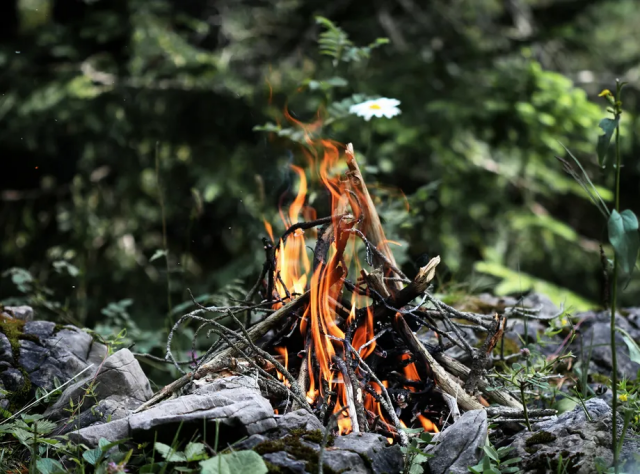 ‘Before the invention of clothing, agriculture, and even the wheel, our ancestors were playing with fire.

How do we know this? In 2012, archaeologists announced they had uncovered traces of ash, burnt twigs, and animal bone — evidence of a controlled fire — while excavating a cave in South Africa. Those tiny fragments were more than a million years old and likely the handiwork of Homo erectus, a species that predates Homo sapiens (i.e., you and me).

Not only did this evidence suggest our ancestors invented campfire before they invented anything else (perhaps with the exception of stone tools), it also revealed that making fire was one of the very first activities to get us working together.

Yet this incredibly ancient practice of campfire making still remains mystifying to many of us humans. A few months ago, a group of friends and I shared a laugh around a campfire realizing none of us — college-educated adults — could explain what, exactly, fire was.

Considering fire’s importance in human history -- and that it’s still how most of the developing world keeps warm and cooks food — we really should understand it.

Here’s a science-backed history and guide to the ancient practice of building a campfire, from its importance for human evolution to the chemistry of how it burns to this age-old fuel’s impact on our health and our environment.

Campfire was monumentally important to our evolution

“Campsites are in essence nests made by human beings,” the biologist E.O. Wilson writes in The Social Conquest of Earth. And nests are the first step to becoming a species whose members look out for one another. The earliest humans “raised young in the nest, foraged away from it for food, and brought back the bounty to share with others,” Wilson writes. The campfire is the origin of community.

It’s also possible that fire aided our cognitive development. In the book Catching Fire, biological anthropologist Richard Wrangham argues that campfires — and the subsequent invention of cooking meat and eating it — were the catalyst that allowed our ancestors to develop big brains. “The extra energy [in the cooked meat] gave the first cooks biological advantages,” Wrangham writes. “They survived and reproduced better than before. Their genes spread. … There were changes in anatomy, physiology, ecology, life history, psychology, and society.”

In these early days, it’s likely our ancestors didn’t actually know how to start fires. They only knew how to maintain them — after a lightning strike or spontaneous conflagration of brush got one started. Anthropologist Christopher Dana Lynn writes in the journal Evolutionary Psychology that inability to start fires put even more pressure on early humans to cultivate ingenuity and tolerance for one another:

The inability to start fires would have required groups to coordinate activities to access and maintain them. This continual cooperation would have put pressure on cognitive capacities for social tolerance, conceiving of others as collaborators in future cooperation …

Dana Lynn also hypothesizes that we may be instinctually comforted by fire; he found some preliminary evidence that suggests blood pressure lowers when we’re around it.

Fire would also lead to inventions like the steel mill and the steam engine, which would allow humans to literally reshape the world to their likings.

“Fire is the one [invention] that made us,” Adrian Bejan, a thermodynamics professor at Duke and the author of The Physics of Life, a new book on technological evolution, tells me. “Without fire you and I would be nothing today.”

Rachel is really enjoying this googling. She doesn’t understand why she never volunteered to help Tiffi before. She continues to search for more articles.

Let’s continue - So what, exactly, is fire?